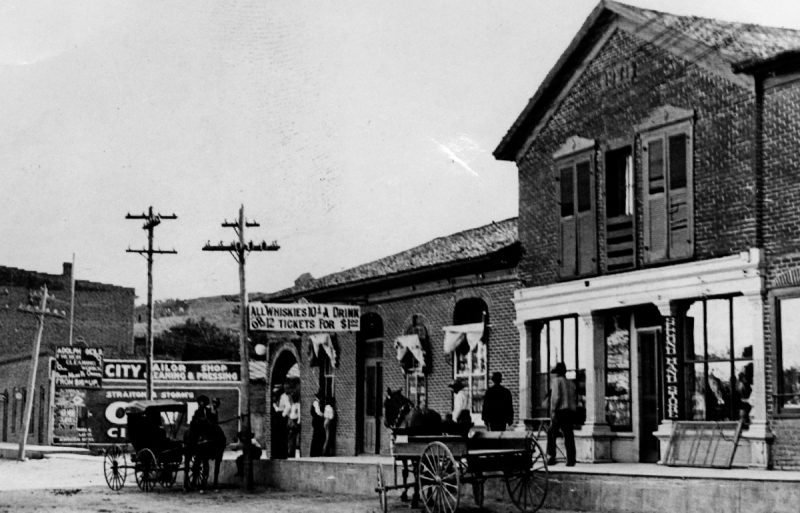 The original Abraham buildings would be demolished eight years
after this photo was taken in 1908. Photo courtesy of the Silver City Museum.

In the early days of Silver City this spot marked the Abraham Block. Built in 1871, the two-story building was the first brick structure erected in the town. Silver City was a dusty, sometimes sodden, spot near a marsh in the high desert, surrounded by some of New Mexico Territory’s richest silver deposits.

Owner of hotels, real estate, mines and a saloon, David Abraham came to Silver City at age 47. Born in Poland with the last name of Dobrzinsky, Abraham had emigrated to London, then to New York and San Francisco. Sons Abe, Jacob, Hyman, Louis, and Sam, and daughters Anna and Sarah all played important roles in the commercial, political or social lives of Silver City.

The Centennial Saloon & Billiard Hall was begun in the Block in March 1875. Completed and opened for business that August, an advertisement described it as the finest billiard hall west of the Missouri [sic] River.

In 1877 the Grant County Herald credited Abraham with planting trees along Bullard and Main four years earlier. He can be also listed as one of Silver City’s “coolest” merchants. In 1877 the Herald wrote that he was manufacturing and storing “upwards of fifty tons” of ice during the winter. He expressed “a determination to sell at the most reasonable price next summer.”

Abraham created the Centennial Theater, reported by the mid-1880s to afford greater and better entertainment than anything of the kind ever before attempted in Silver City. A separate entrance and outside stairway permitted proper ladies to attend the revues, plays and road shows. At the same time, an early leader among the women of “easy virtue,” Kate W. Stewart, operated her business at the rear of the saloon. In the summer of 1916 the Block was razed to make room for a modern Abraham Brothers business block.

An interesting piece of local history occurred in 2017 when the furniture store Manzanita Ridge bought a painting at an estate sale. When the owners of the store discovered that it was a Willem de Kooning painting that had been stolen from the Arizona Museum of Art 30 years earlier, they immediately contacted the museum and returned it to a very grateful museum staff.