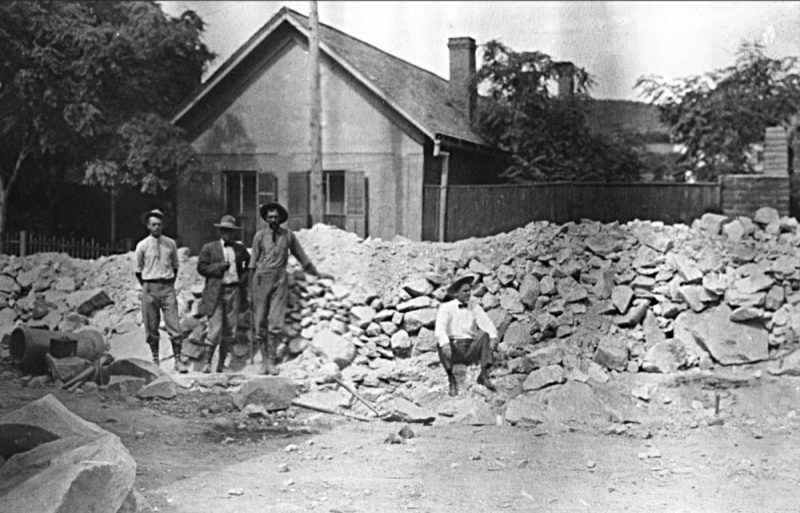 Excavation for a city sewer line tore up Bullard Street in front of the Bremen house in 1910.

Martin Bremen came to the area near what was to be Silver City in 1866, when he was 26 years old. He built the first lumber mill. He later owned flour and ore mills, a ranch and a mercantile. The lumberyard was behind the residence, while the store was opposite the house on Bullard Street.

He first homesteaded in Pinos Altos, where he began buying mining claims. Eventually he owned several silver mines, mostly in Chloride Flat, west of Silver City. The largest amount of silver in the region came from the Chloride Flat mines. Today the area holds a housing development.

Bremen, elected four times as mayor of Silver City, built his one-story adobe house in 1876. It is T-shaped with cross-gable roofs and large windows.

Described as “the canny Dutchman,” Bremen was a generous drinker, buying drinks for the men who followed him from bar to bar. Drunk, he would begin breaking dishes, glasses and furniture. Once sobered, he always paid for the damage. One bar owner brought out more dishes for Bremen to smash so the bar could acquire a complete matching set.

Bremen married Donaciana, daughter of Judge Merrill Ashurst of Santa Fe. While on his way north with silver bars to pay for the wedding, an ingot fell from the buckboard. Bremen supposedly told the driver not to bother to stop because there were plenty more where those had come from. The Bremens’ daughter Ida graduated from the Chicago School of Music and went to live in New York City.

Following a disappointing mining venture in Globe, Arizona, Bremen returned to Silver City, despondent and drinking heavily. After several days, friends took him to the Ladies’ Hospital. There he stole morphine and used it to end his life on November 4,1897.