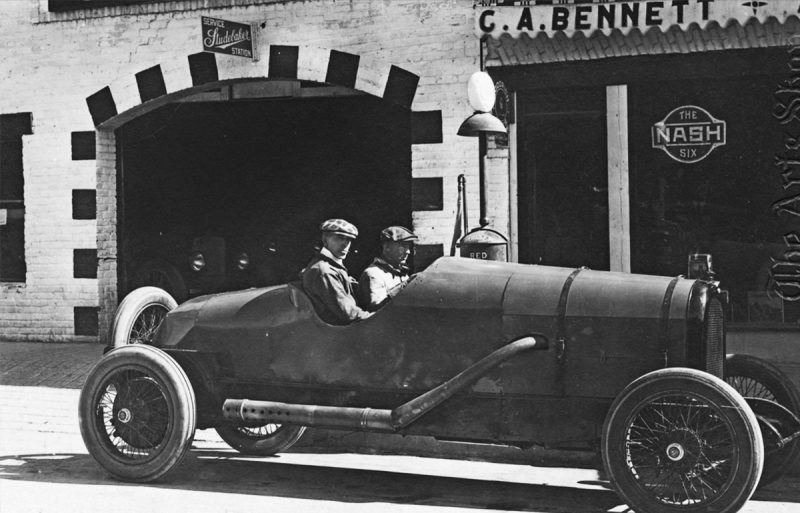 Brothers Clarence A. and Ernest F. Bennett were early and passionate fans of the automobile. It’s only fitting that Clarence’s 1913 arrival in Silver City from San Diego was by auto. He joined his brother in operating a motor stage line to surrounding communities, including the remote mining camp of Mogollon.

In 1916 Clarence Bennett adapted a metal-clad building that had been the Crescent Lumber Company’s office into a salesroom for Marmon cars and Hupmobiles, then Nashes and Studebakers. Soon he also secured the agency for the Oakland automobile, “one of the best known makes of motor cars.” The Bennett Motor Company expanded onto the two adjoining lots in the 1920s. A metal facade embossed with a faux-brick pattern concealed the building’s wood framing.

Subsequent owner W. H. Emerick sliced off the corner of the original structure to create a modern drive-in filling station in 1935, repositioning the glass and metal facade on a sharp diagonal. “The island which will be formed by the gasoline dispensers will form a double driveway,” a local paper reported. Two years later the south unit of this ever-flexible building was remodeled as a showroom for Emerick’s Nash-Lafayette dealership.

During World War II the Navy bought the Bennetts’ machine tools and shipped them to New Mexico State University for training machinists. Ernest Bennett accompanied the tools as instructor.