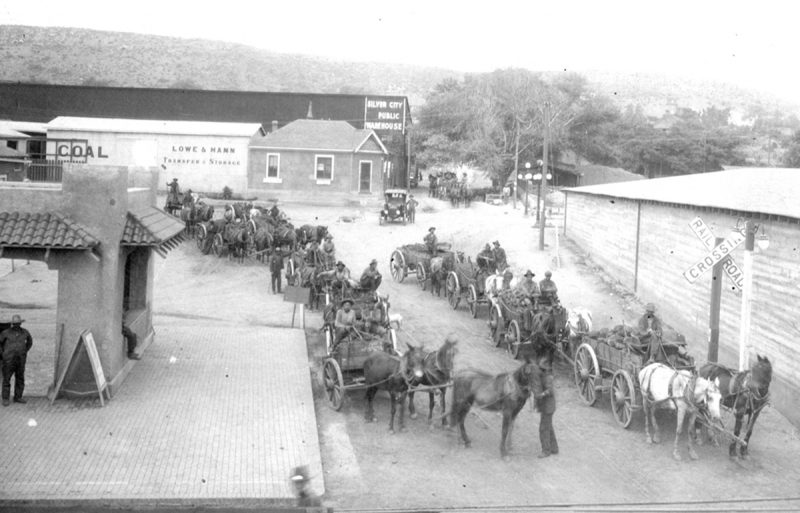 Elizabeth Warren, a real estate investor and contractor in the late 19th and early 20th century, built the building on the corner of San Vicente and Bullard in 1914. Thomas L. Lowe and Edward T. Hann had purchased the entire block for their coal company, across from the proposed location of the Santa Fe depot. Also constructed in 1914, the Ford motorcar agency–“the show rooms in a commodious building”–was destroyed by fire in 1918.

On the land before 1914, corrals of the William A. Tenney Freight Company sheltered both teams and wagons. Tenney had employed hundreds of men.

Lowe was a prominent citizen in Silver City for over two decades. In addition to co-owning the coal business, he served as director of three banks and as officer of two. He was secretary of the Board of Regents of the New Mexico Normal School. He was a member of the Silver City Chamber of Commerce, Elks Lodge and the Masons. In 1924 Lowe was convicted of banking improprieties and paid a $750 fine. He left Silver City and relocated to Los Angeles, where he died in a car accident in 1926.

Hann brought his wife Minnie and two children to Silver City from New Jersey in the early 20th century. Hann went into the coal business with Lowe, but after Lowe’s conviction, the business was sold. By 1930 the Hann family no longer lived in Silver City.

In the late 1940’s through the early 1950’s, Murray Ryan operated his family business, a beer and liquor distributorship, on the site. Life-long Silver City resident Elizabeth Mudry recalls that her uncle and her grandfather Luis Madrid worked for Ryan, delivering wholesale stock to bars.

Following the 1950’s the corner building and warehouse were used for distribution of government food, for a blacksmith shop, a meat market and two bakeries. The perfectionist owner of the Black Diamond bakery regularly hurled imperfect baked goods out her back door. Neighbors soon learned to snatch up her rejects.