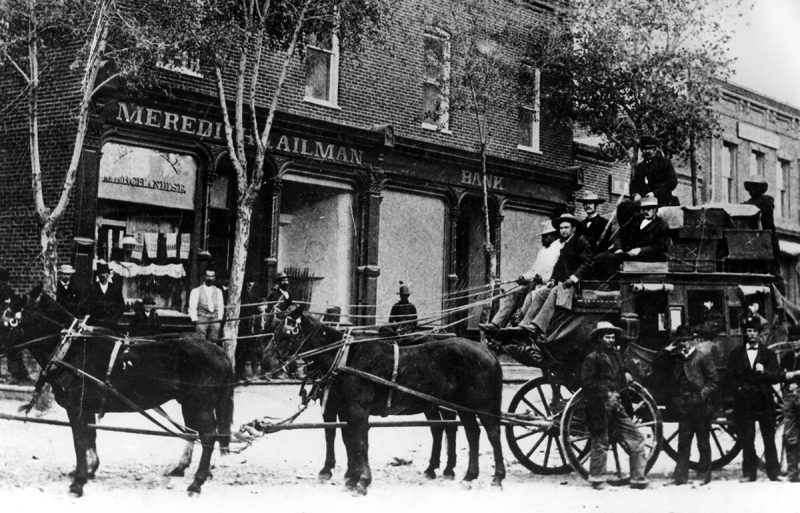 In 1880 Joseph Reynolds and his wife Guadalupe owned a single-story mercantile store on the corner. Wishing to retire, Reynolds sold to Hartford M. Meredith and Henry B. Ailman, who renovated the building and added a story. They later set up a bank in the premises. In 1883 two other banks failed, leaving this the only bank in town. That year they sold the store to Max Schutz but kept the bank.

A photo that includes the bank, circa 1882, shows several men, some on a well-laden stagecoach, at the corner of Broadway and Bullard. A legend arose that Wyatt Earp and Doc Holliday were two of these men. Indeed, they did stop in Silver City on April 15, 1882, but details in the photograph established that the two fugitives had likely left Silver City unphotographed.

Meredith and Ailman founded another bank, selling shares to John Brockman and others. Brockman leveraged his investment at 100%, borrowing the money from Meredith & Ailman Bank. In a deteriorating economy, complicated financial transactions and litigation ensued, with Brockman perjuring himself (according to Ailman), and the bank failing. This bank’s receiver sold the property at auction to – John Brockman.

In 1892 tenant Schutz bought the building and refurbished it to include whole- sale and retail groceries, while leasing space upstairs to doctors and lawyers. On March 1, 1900, Schutz opened the Palace Hotel.

In 1918 and later, the property was sold to banks, which hired El Paso architect Henry Trost to oversee extensive and opulent remodeling. The economics of the 1920s were turbulent in Silver City, and the owning bank failed in 1924. In 1928 Edward A. Layne bought the property and leased it to J. J. Clark, who with Trost’s help undertook more remodeling. Clark Hotel opened in early 1929.

In the following years the hotel changed its name to The Monterey before reverting to The Palace. Other businesses have included galleries, legal offices, shops and real estate offices.