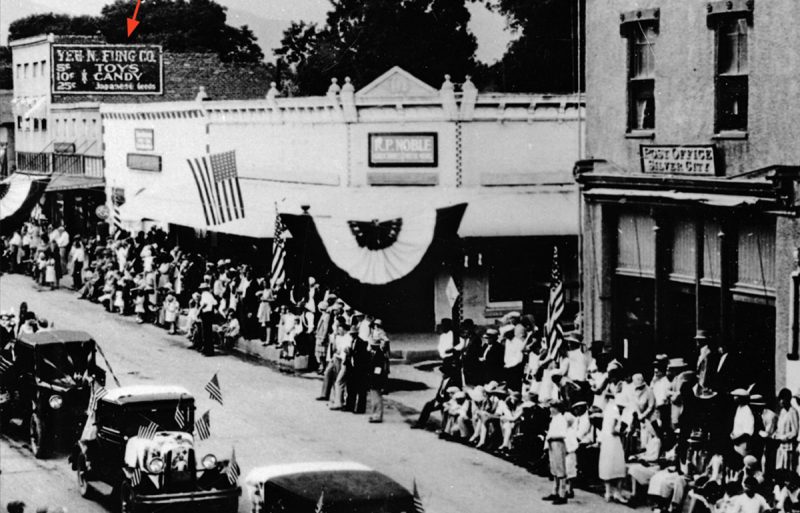 The C. T. Ross building (Yee N. Fung store sign on upper wall) can be
seen at left in this 1919 parade view. Photo courtesy of the Silver City Museum.

Built in 1916 the connected buildings originally served as the office of Wells Fargo, which was often responsible for shipping Grant County’s wealth—gold and silver ingots–to buyers or brokers on the coasts.

The two-story portion of the Ross building was the scene of a 1925 tragedy. Y.N. Fung owned a 5 and 10 cent store, Fung Yuen & Company, and lived in the attached apartment. Mr. Fung was found dead in that apartment, a butcher knife stuck through his head and hatchet wounds covering his body. It was known about town, according to the Silver City Enterprise, that Mr. Fung kept cash on the premises, having lost faith in banks when the bank failure of 1924 nearly ruined him.

Suspicion fell on Woo Dak San, who was a waiter at a recently-closed Chinese restaurant. He “was known to be broke and to be a drug addict.” When he left town suddenly, local officers notified authorities in El Paso where he was apprehended and returned to Silver City. His testimony concerning his whereabouts on the night of the murder was suspicious. He had $300 in currency in each of his shoes and $35 in gold coins and $35 in silver “for which he was unable to give a satisfactory account of how he came by.”

Dak San confessed but later repudiated the confession, claiming that it was obtained “under promise of morphine for which he was suffering.” A jury found him guilty and he was sentenced to hang. After the sentencing the state changed the method of execution to the electric chair, and Dak San’s attorney Alvan N. White appealed. In 1932 New Mexico’s governor commuted the sentence to life, and in 1941 Dak San was paroled.

Al and O’Bera Click moved their family to Silver City in 1941 so he could be treated for tuberculosis. In 1946 Mrs. Click purchased The Model Shop, a high-end clothing boutique. The family operation continued at this location for another 55 years.