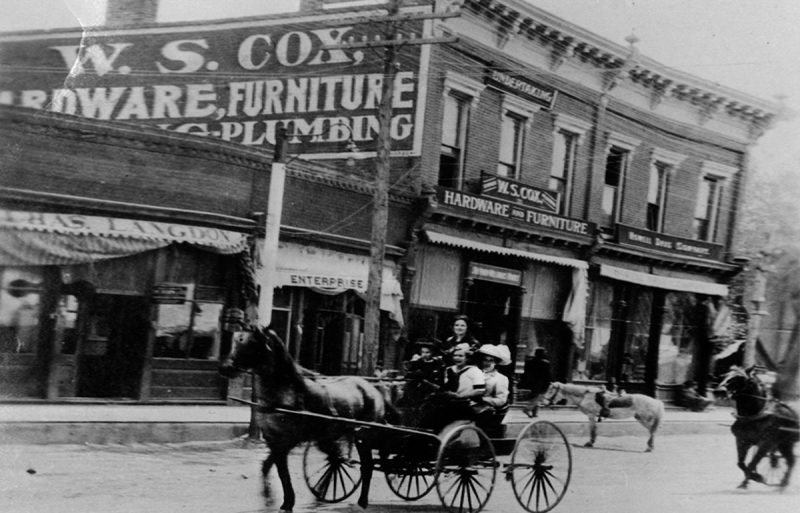 A view of a buggy in front of the Peter Wagner Building
in 1910. Photo courtesy of the Silver City Museum.

Peter Wagner arrived in Silver City from France in the late 1870s. He had served in the French army in the Crimean War and had participated in the siege of Sebastopol. He was a barber by trade but a miner by ingenuity, having invented a process for treating sulphide ores to extract gold and silver.

Perhaps his barbering connected him most closely to this building, built by George Grabe in 1884. Here were Louis Abraham’s Free Silver tonsorial parlors, advertising two porcelain bathtubs of the most approved design: “Hot and cold baths, any hour of the day or evening, 35 cents.” To achieve such luxury the Abrahams installed a water tank to the rear of the building. A filthy cowboy out for a Saturday evening of barhopping could be assured of warm, unused bath water.

The barbershop, as well as shops for a tailor, spaces for a drug and stationery store, a jewelry shop, a Singer sewing machine shop and a grocery store, all at different times occupied portions of the building.

The opposite of creating smaller spaces also occurred. The Silver City Enterprise, which in 1905 moved into the address previously occupied by furniture store and undertaker W.S. Cox and Company, described in 1899 Cox’s cutting a doorway through building back walls to add a larger display area for coffins and settees. A coffin customer would first negotiate through harnesses.

Often occupants and owners along Bullard viewed the large buildings or “blocks” as big boxes with interior walls able to be thrown up, rearranged or pierced as needed. Those arrangements, as well as joining buildings and constructing outside stairs, may have created mazes of connected rooms that would flummox us modern visitors.