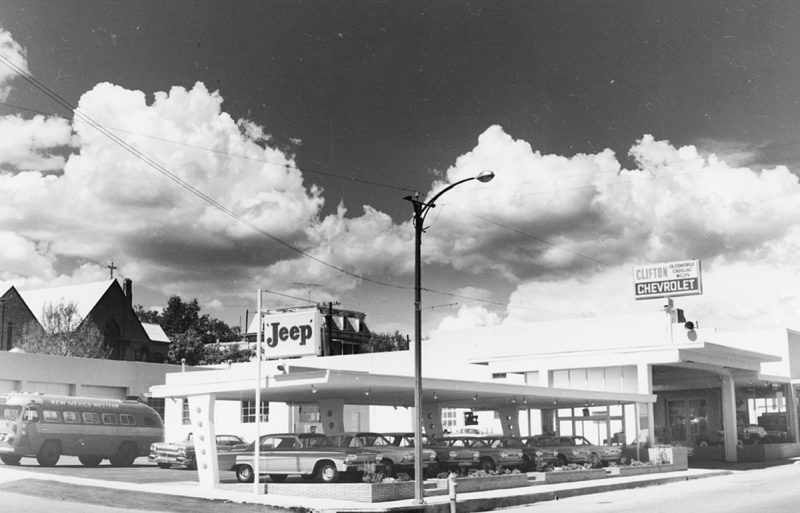 This block is major proof that Silver City is a community where artists matter. It took an artist to buy a down-at-the-ears former automobile dealership, helmet factory and motorcycle showroom and transform it with murals by the Youth Mural Project, a plaza, a fountain by Barry Namm, shops and restaurants.

The property didn’t start with cars. Initially and through the 1940s, this block held only homes. In 1876 John M. Ginn owned the first recorded residence. Other houses were added to the block. A dozen years later, Mrs. Ginn was behind on her property taxes for half the block. The first graduate of the Normal School (now WNMU), Isabel Eckles, resided at the south end of the block. In 1916, Jesse Adams, who lived at 615 N. Bullard Street, put half the block of empty lots on sale, and property values moved up.

In 1950 contractor Richard Tatsch got building permits to construct a facility for Clifton Chevrolet. The showroom and offices took up much of the north side of the block. On the southeast corner, at 6th, new cars gleamed where vendors now sell crafts under the roof.

By 1990 the dealership had closed. The central building was originally used as an oil-changing facility. When Hub-owner/artist Janey Katz purchased the property in 2005, she had the work pit filled in and since then the building has housed a succession of restaurants. The buildings around the center of the block were originally used for washing cars and as garage bays for repairs and for installing new tires and batteries and now are home to a variety of businesses.