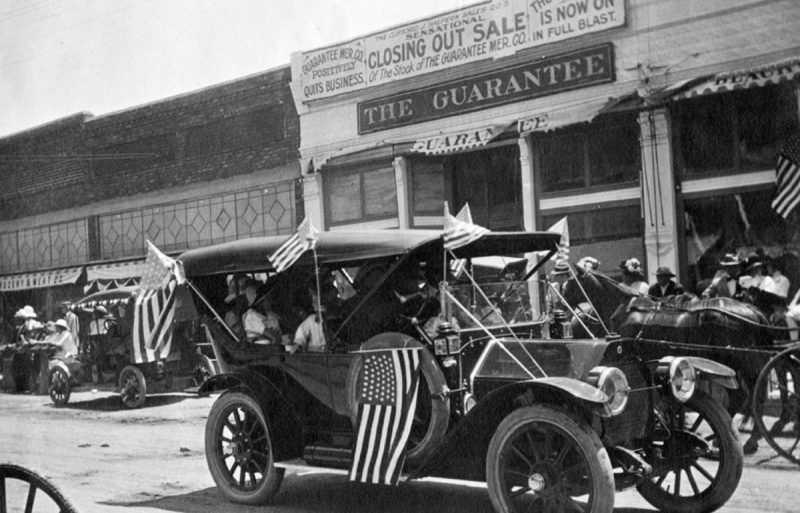 This 1912 Fourth of July parade photo shows four of the storefronts now part of the Vesely Building.

Frank Vesely (1876-1959) was born in Bohemia. He emigrated to New York City with his parents. In school Frank performed well academically and made a name for himself as an oarsman. At about age 30 he met Mary Masin at a New York reunion of Czechs. The two were quickly engaged with a condition of marriage: move to Silver City where Mary’s father lived.

Vesely was a ten-term mayor, a member of the third and fourth state legislatures, a state senator for three terms, and a New Mexico land commissioner for two terms. He had real estate, mining and business interests.

Before purchase by Vesely in 1929, this property was owned/used by numerous businesses, in different parcels. Starting in 1873 there were meat, grocery, and grain markets; hardware and furniture stores; saloons and cafes; a candy factory-store (Leras’); book and music stores (Blackwell’s); photographers (Hinman); assayers; haberdashers and millinery, and others.

The property has a history of destruction from fire and flood, particularly in 1895, 1905 and 1912. After losing $3,500 from a flood, M.K. White made it a brick structure, and put in “a magnificent new front on his two stores.” Elizabeth Warren was involved in much of the reconstruction, also installing sidewalks and the breakwater that still exists. In 1935 another fire damaged a pool hall, barber shop and Blackwell’s jewelry.

In 1945 the popular Barker’s Cafe was the scene of violence when an owner, Yat Lim, known as Charlie Mah, was beaten to death. Two white men tried for the murder were found not guilty despite eye-witness testimony.