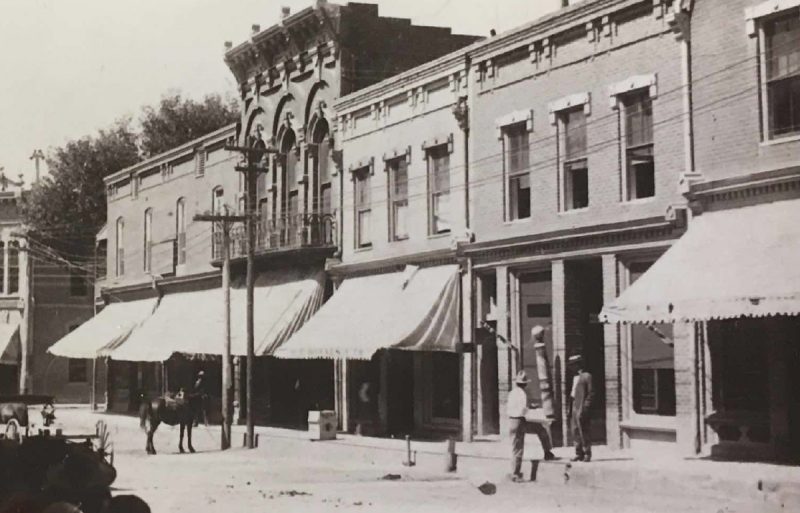 The Charles Schutz Building was occupied by a barbershop between 1908-09.

Charles Schutz, possibly a brother of major Silver City businessmen Max and Aaron Schutz, constructed this building in 1881. Charles opened a bakery/confectionery here, eventually sharing the space with a grocer. He later rented the storefront to P. B. Lady’s harness shop and J. M. Fritter’s confectionery.

In the late 1880s, Schutz experienced a financial reversal, and on April 20, 1889, the property was sold “at the front door of the post office” for $2,070. A consortium with Schutz’s two brothers and John Brockman, a rancher and merchant and banker, was the high bidder. Charles moved to San Diego the same month, was placed in an “insane asylum” in 1890 and died two years later.

Aaron Schutz bought out Brockman for $1,150 (about $30,000 in 2017) and opened a boot and shoe shop in the building. In 1890 he sold the property to J.W. Fleming, one of those most responsible for bringing the New Mexico Normal School, now Western New Mexico University, to Silver City. Fleming kept the building six months, selling it to attorney Col. Howell Pickett for almost twice what he had paid. Pickett would own the property until 1912, when he sold it to John Coffey.

For a decade in the 1890s and early 1900s this location housed a drug store, and it later held a combination barbershop and pool hall. The New Mexico Cigar Company was here from 1909-1929. Upstairs tenants included physicians, dentists, attorneys, and a broker. There may have been openings into adjacent buildings, and tenants may have occupied one or both stories. In 1918 a bank foreclosed on the property; then the bank itself—and all the other financial institutions in Silver City—failed in 1924.

Another short-lived confectionery followed the cigar company. There are still people living who remember the next occupant, the Grant Cafe, which opened in 1931. In the spring of 1947 Jess Thorne of Deming bought the cafe, announcing his intention to open a bar. That July, a newspaper exulted “The Buffalo Bar NEW—MODERN—CLEAN.” “The Buff ’s” last owner, Sam Trujillo, closed the bar in 2014, and the liquor license was sold. “The Buff ’s” last owner, Sam Trujillo, sold the liquor license and closed the bar in 2014. Patrons from all over the West and elsewhere remember the bar with some affection as a classic “dive” and a Silver City landmark.