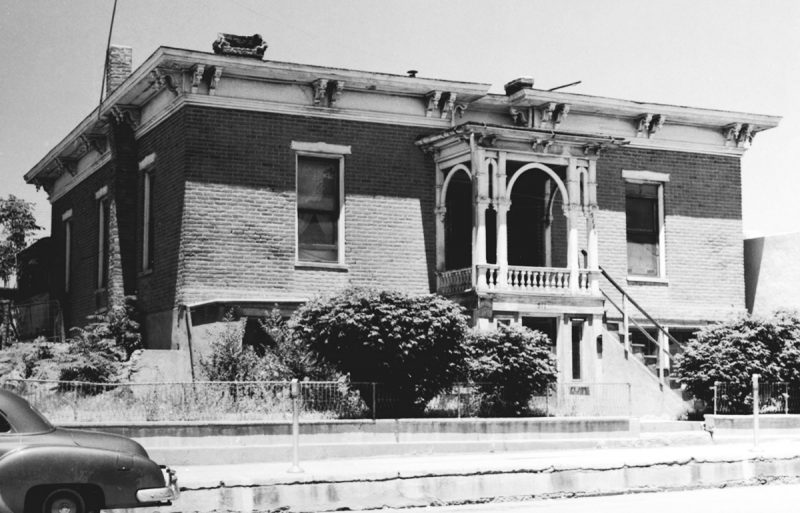 This 1949 view, which shows the Cohen House before its exterior brick was stuccoed, reveals a great deal of deferred maintenance.

Isaac N. Cohen had this Italianate-style house built in 1883. It is one story with a basement, constructed of brick. This style is unique in Silver City, and its double mahogany doors at the top of a flight of steps made this house quite noticeable.

Cohen was born in Jerusalem, Syria, in 1842. He became a naturalized citizen of the United States and served as a private in the New Hampshire volunteers during the Civil War. He enlisted in October 1862 and was stationed in Savannah, Georgia, before discharge in July 1865.

According to the 1880 census, Cohen had married Adeline Rosenberg, who was born in Germany. Their son Joseph was born in New Mexico and Charles, in New York. These boys were 5 and 11⁄2 years at the time of the 1880 census. A daughter was born on September 1, 1883.

Cohen was a prominent merchant and one of the prime movers of bringing a railroad to Silver City. He built a business block on the northeast corner of Bullard and Broadway. Silver City owes many of its substantial improvements to his energy and enterprise. He was highly respected by all who knew him in business or socially. Though Cohen was a prominent citizen of Silver City, he still had ties in New York City. In 1885 he moved there to provide a better education for his children.

The house was first sold in March 1888 to A. H. Morehead. Next began a history with variable owners and various uses of this “elegant” home. It has been known as the Kidd place and the Mattie Irwin house.

The residence was used by palmist Professor Albertson, by Madame Lily Grimes Beauty Parlor, by a millinery offering stunning hat creations for Easter, The Toggery (clothing store), and by an “expert manicurist” doing manicures for 50 cents.