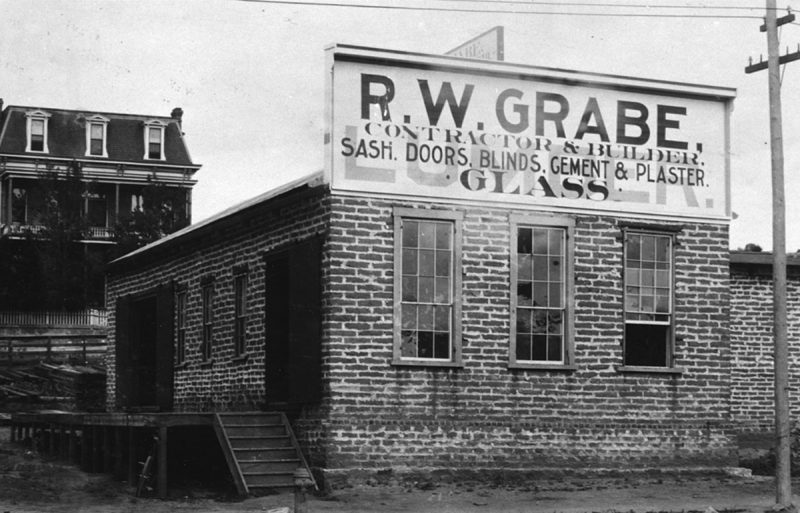 The Grabe Planing Mill stood at the corner of Bullard and 7th from 1899-1928. The Thomas
Conway house, in background, still stands on Texas Street.

Toward the end of the 19th century the northwest corner of 7th and Bullard was vacant. A person standing there and looking north would have seen only the Rosenberg house.

Richard Grabe in 1899 bought the southern part of the block between Bullard and Texas to build his two-story residence and to establish his wood planing mill and carpentry shop. Grabe was a contractor responsible for erecting or renovating several structures on Bullard. In 1907 Grabe moved to Globe, Arizona, and his house temporarily became a boarding house. A plumbing company moved into the mill.

Around 1905 contractor and insurance agent Elizabeth Warren bought the once-lonely Rosenberg house, just north of Grabe’s former place, and lived there for a time. Warren, like Grabe, used the nearby area for construction material. She set up her rock crusher on empty ground in the block to the north.

A garage and machine shop went up on the corner in 1911. In 1914 it was the Ford Garage where Charles McAninch operated Silver City’s first taxicab company. By 1922 “Oxy Bill” Hamlett had his welding shop on the premises.

Across Bullard Street from several lumberyards, two gasoline service stations and a machine shop, this corner served the automobile/construction businesses that centered on this stretch of the street.

In 1929 the present corner building, originally an auto salesroom, replaced the former mill. Later occupants included a stationery store, a bead shop, and a fabric store. The two houses were both demolished.