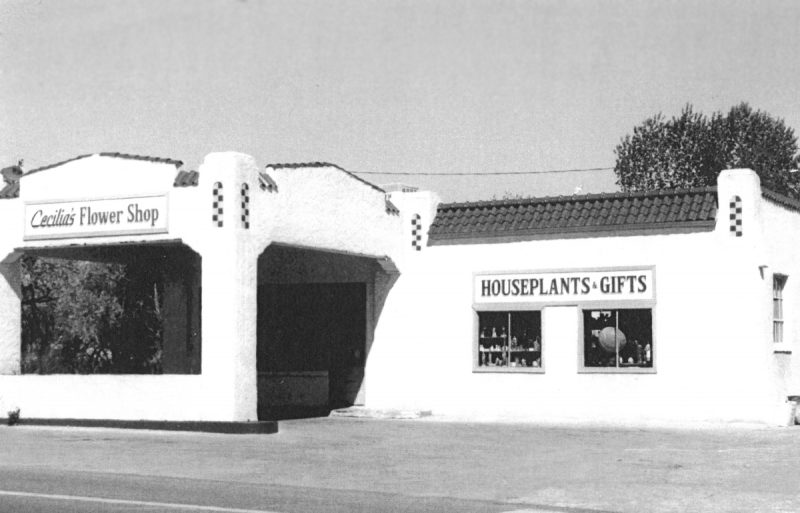 MainStreet image of Cecilia’s Flower Shop – Local businesswoman
Cecilia Morales moved her flower shop to this corner in 1976, operating here for many years.

James Mullen owned this corner in 1885. It was unimproved and Mullen appeared frequently on the delinquent tax rolls.

The College Street bridge, enabling traffic to cross the Big Ditch to and from Hudson, came in the 1950s. Until that time, northbound Bullard traffic jogged on College Street and continued up Pope Street.

In 1920 the corner of Bullard and College held piles of boards. Silver City Lumber Company and then Marke Lumber Company had been on that corner for several years. In 1920 Crescent Lumber, having bought out their competition, razed the small buildings of the previous occupants. The office of a transport company that used the site for its wagons or trucks evidently was spared.

In 1924 Leonard Lumber Company bought the property from Crescent. H.K. Leonard made $500 in renovations to his recently acquired store. He added a “battery station,” 24 by 34 feet, covered with iron sheeting except for the wooden front. In the 1930s a service station supplanted the lumberyard. Its most memorable tenant was Dick’s College Service Station.

One occupant of this site has been a non-profit bicycle cooperative providing repair stations for community use, sale of reconditioned bicycles and programs like Earn-a-Bike to promote bicycle ownership by youngsters.