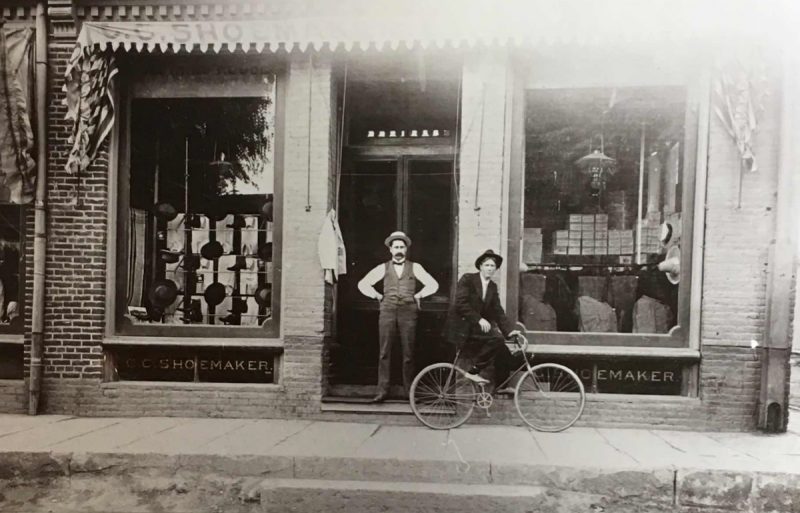 The L.C. Parker Building has been at this site, on Bullard and almost to the corner with Yankie, since 1882. A clothing store occupied the first floor in 1882. Five years later newspaper accounts described Shoemaker’s Clothing Store in the building. C.C. Shoemaker, a town father, and the American National Bank owned most of the whole city block until 1926.

In offices on the second floor above Shoemaker’s, renters changed at least eight times between 1883 and 1926. Most were photographers; three were physicians. The upstairs portion of the 1900 addition to the Parker building, extending it all the way to Yankie Street, also served as physicians’ offices.

Occupant Lote Addison Skelly provided an example of persons who left the relative security of the East Coast for the more rough-and-tumble society out West. He arrived in Silver City in 1886 at age 24 and opened a photography studio. In 1888 he moved his equipment to the second floor of the Parker.

Newspaper ads tell us that Skelly was willing to travel throughout the country to take fine photographs. He bragged he possessed high quality lenses and the newest technology – film that permitted forty-eight images in succession.

In 1890 Skelly toured Mexico to investigate whether to move his business there. He declared upon returning that he had decided to stay put. The following year he and a partner bought a tobacco shop, and he scouted Central America for business opportunities.

When Skelly returned, he moved his photographic workspace and bought an interest in a Santa Fe “art studio.” In early 1894 Skelly was appointed postmaster and for a time was also chief of the Silver City Fire Department.

In 1898 Skelly opened a newsstand on Broadway but had to relocate to Globe, Arizona, because of ill health. He died of tuberculosis in 1904.