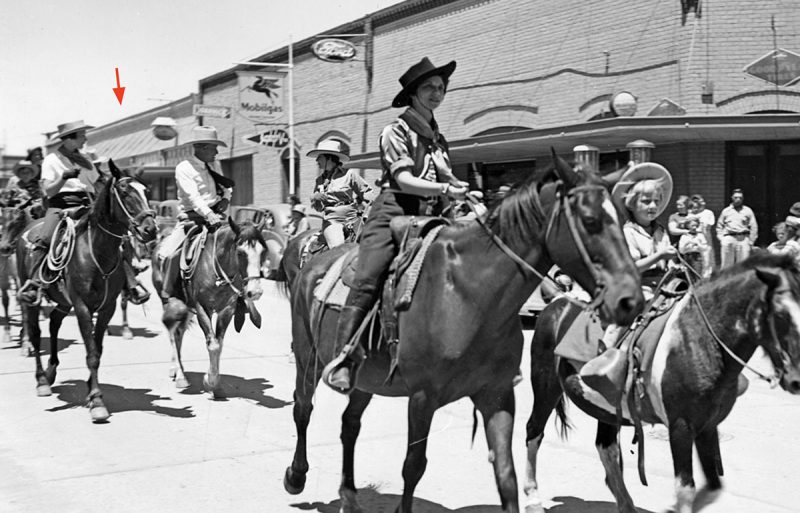 The Schutz-Brent Block appears at far left behind the horseback riders in this 1930s parade photo.

This part of Bullard Street originally was residential. Delinquent tax records for the site between 1883 and 1894 recorded values of unimproved property. In May 1900, however, a newspaper reported that Charles Bottom had erected a heavy metal fence around his residence on the east side of Bullard between Kelly and Sixth. Bottom lived on the parcel for years, and in addition to his house, had an orchard.

An early commercial building on this site, the Schutz-Brent building, was erected in 1916 for Adolph Schutz and Josh Brent. A single-story building, it is considered a structure “contributing” to Silver City’s historic past.

In 1916 Schutz and Brent bought the northern half of the city block from Bottom. There they constructed a 40-by-100 foot brick building with six store fronts. Over the next seven years the building housed W.C. Grocery, the Crown Taylor Shop, Mrs. Walter Gibbs Specialty Shop, Schadel’s Bakery, and the Silver Horseshoe Tea Room.

After 1934, the six storefronts were remodeled into four. Today, if you examine the storefronts and interiors of the Schutz-Brent Building a visitor can see the shape of the original structure and how remodeling may have worked within that space.

Countless businesses (including that of famed saddle maker A. D. Seitzler) have cycled through the various storefronts since 1916, but with a tenure of over 50 years, a popular Mexican restaurant proved to be the longest-term occupant in the buildings first century.