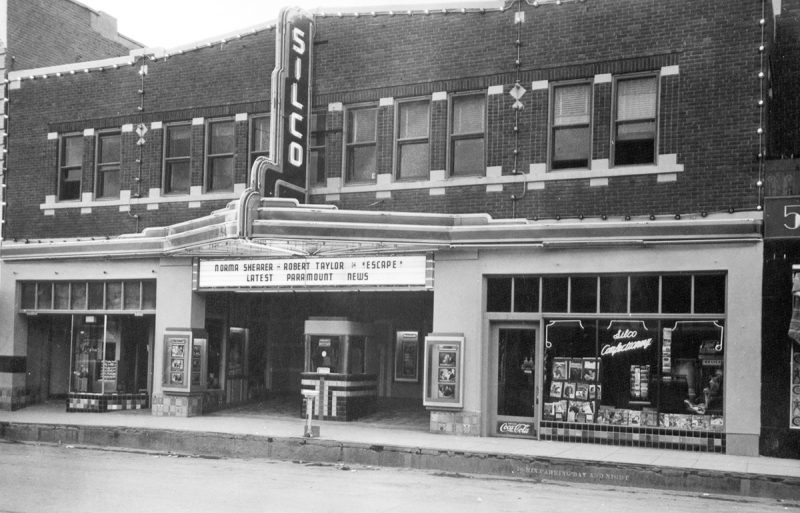 The Silco Theater as it appeared after a major remodeling completed early in 1941.

On this site the Abraham Brothers had constructed the Princess Theater. The Princess bought out the first movie “palace,” the Airdome, which had started existence without a roof, finally installed in 1909. In 1914 The Princess showed The Man from the West, one of several movies made in Silver City by Romaine Fielding, relying on local talent.

In 1923 the Silver City Masonic Lodge had the Princess torn down. J.I. Kane of El Paso built the structure that contained a theater, shops, offices and the Masonic Temple. The Masons and then promoters Eddie Ward and Phil Lynch first brought theatrical productions and shows, and later, “first run” movies. Lessee Ward bought the Silco (“silver and copper”) from the Masons in 1931.

In 1926 Ward captured the World Series games between the New York Yankees and the St. Louis Nationals on an “electric scoreboard.” For twenty-five cents per game, patrons could get an instant account of balls, strikes, walks, outs and runs, thanks to a direct connection with Western Union.

Beginning in 2005 Silver City MainStreet Project set about to bring back that Art Deco modernity, which had disappeared into a furniture store, a “mini-mall” and a used goods store. With community support, grants from donors like PNM, and help from the town and state, the Silco has returned theater to Bullard Street.